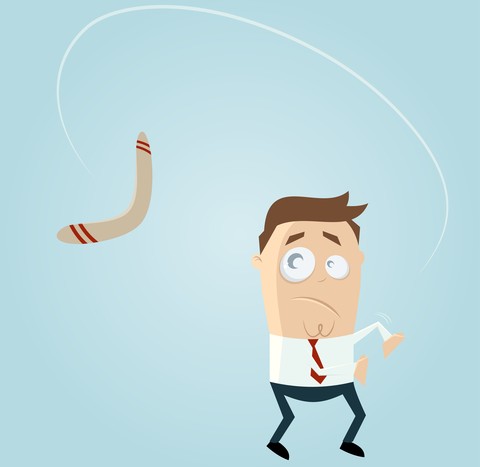 Three-fourths of HR professionals and 65 percent of managers say they are more accepting of hiring boomerang employees—those workers who leave an organization only to try to rejoin it sometime later—than they used to be, revealing a changing mindset about these individuals.

The findings are from a national survey of more than 1,800 HR professionals, managers and employees conducted by the Workforce Institute at Kronos and website WorkplaceTrends.com.

Interestingly, nearly half of HR professionals said their organization previously had a policy against rehiring former employees, even if the employee left in good standing.

A large majority of HR professionals (85 percent) reported that in the past five years, they have received job applications from former employees, and 40 percent said their organization hired about half of those former employees who applied.

Dave Almeda, chief people officer at Kronos—and a boomerang employee himself—discussed with SHRM Online why people boomerang, how Kronos handles boomerang workers and what kind of worker makes a good rehire. After spending 16 years in various HR functions at Staples, Almeda joined Kronos as the company’s head of HR. Eventually he left Kronos to pursue another career path, but soon realized that his new role was not a good fit for him. Dave returned to Kronos, and took a salary cut, because he felt its culture and ideologies better suited his skills.

SHRM Online: Why do people boomerang?

Almeda: It’s not entirely accurate to paint all boomerang candidates with the same brush. Each employee moves on for their own reasons. At Kronos, we generally see four different flavors of boomerang employees. [Kronos currently has more than 180 boomerangs.]

The first is what many consider a traditional boomerang: someone who works at a company for a few years, sees an opportunity elsewhere to develop new skills and then comes back to the organization later on, typically at a higher level and higher rate of pay. Traditional boomerangs are typically gone anywhere from 3-5 years and often come back with new perspectives, processes and innovative ideas.

Then you have your life-event boomerangs. These employees generally leave because of life events beyond their control. For example, their spouse is being relocated, or they left to raise a family or must take care of a sick parent. What’s unique about this group is that they’ve created a type of contingency workforce. They oftentimes boomerang back anywhere between a few months or a few years later in a contractor-type role to help the company fill a specific need. We have several of these contingent workers at Kronos who used to be full-time workers. Their time-to-productivity curve was extremely short as compared to a new hire’s.

The third flavor includes planned boomerangs or seasonal hires. These employees could be students who work summers or during winter break, or adults who vacation for extended periods of time in the same place. Specifically in retail and hospitality, you’ll find these people picking up shifts during holiday shopping season or during the vacation rush.

The final flavor entails people who have a career itch to scratch. They’ve likely worked at an organization for a number of years during which they were inundated with recruiting calls and e-mails. They’ve also seen talented colleagues come and go. Over time they think, “Maybe I should be doing something different,” or “If I don’t do this now, I never will.” Frequently these folks leave for a new challenge but then quickly realize they’ve made a mistake. They’re generally gone for just a few short weeks or months. This is the boomerang category that I fall into. I was aggressively recruited to help transform HR for a specific industry but quickly realized that leaving Kronos was a mistake for me, regardless of the size or quality of the opportunity. While I physically left for a very short period of time, my heart remained with Kronos.

Almeda: In a perfect world, we’d never rehire another boomerang Kronite again; that would mean we’ve been successful in retaining all of our top talent. But 100 percent retention is unrealistic, especially if you consider the different flavors of boomerangs. I 100 percent agree with the view of our CEO Aron Ain on this topic: Aron very strongly believes that we don’t own people’s careers. As a company we follow that mantra. If an employee has been a key contributor to our success and has the opportunity elsewhere that will better themselves and/or their family’s lives, why wouldn’t we both support them when they leave and welcome them back if they choose to return?

While we don’t have a specific strategy for bringing back boomerangs, Kronos has a very strong social media presence, including an alumni group administered by a third party that helps former employees keep tabs on Kronos while enabling us to easily connect with alumni when necessary. However, the majority of boomerang employees, myself included, maintained a strong relationship with their manager after leaving. That employee-manager bond must be forged well before departure and can lead to new opportunities in the future for former employees. If they’re a high-performing employee and have the opportunity to come back to Kronos, we will continue to welcome them home with open arms.

Almeda: Being a good boomerang worker is all about what you did with the company while you were there, not how you boomeranged back. Nearly all boomerang employees were former top performers who believed in and embodied the organization’s culture and values. If an employee was not a solid performer in their past position with the company, why would any company, Kronos included, consider bringing them back?

These former high-performers also exited in the right way. For example, they might have helped with the transition of their day-to-day responsibilities, definitely left without burning bridges, and stayed in touch with their managers and colleagues post-departure. These employees often come back with a renewed sense of pride in the organization. They can also bring new and beneficial perspectives, ideas and processes back to the company. Speed-to-productivity and fit within corporate culture is far greater with these employees, and therefore hiring a boomerang presents far less risk than hiring a brand-new employee.

SHRM Online: Tell me more about the benefits of rehiring boomerangs. And what about the downside?

Almeda: The obvious benefit of rehiring a boomerang employee is their time-to-productivity. They understand the company, the product, the services, the systems and what’s expected of them. You’ve brought them back for their specific set of skills, so the time-to-value will be much quicker and less expensive than bringing in a brand-new employee. You also know that the boomerang will mesh with the culture, which can’t be understated. The majority of strong job candidates can do the work; the unknown is if they’ll fit within your culture.

Another unanticipated benefit that is often overlooked is the morale boost that these employees can provide to their colleagues. If a strong performer left, especially for an opportunity they couldn’t pass up, and then boomerangs back, co-workers who may have had leaving in the back of their own mind might stop and say, “Look at what she or he went through. Maybe it’s not that great out there after all.”

As for a downside, the reverse effect can happen if you bring back someone who wasn’t considered a top performer by their peers. Top talent wants to work with top talent. It could well demotivate the staff if you bring back someone that makes them think, “I can’t believe they brought that person back. They didn’t carry their weight before. We must be really desperate for talent here.”

SHRM Online: What sets successful boomerangs apart from their colleagues?

Almeda: Being a top performer is typically a prerequisite for any boomerang. Outside of that, each boomerang’s situation is unique. One trait that definitely sets them apart from other employees is the ability to build strong relationships with their managers and co-workers and maintain that relationship after they’ve left. While HR and employee feelings on boomeranging is a changing trend, the employee’s relationship with his or her manager is the key link that determines if an employee ultimately makes the decision to come back.

Above all, boomerangs who meet all of the criteria that we’ve discussed typically have a very high level of commitment to and pride in the organization that they’re returning to. The way it’s been described to me is that they feel like they’ve come home.

From a personal perspective, returning to Kronos made me more fully aware of what a truly exceptional organization I work for. Having this perspective has increased my loyalty to the organization in meaningful ways.

Roy Maurer is an online editor/manager for SHRM.